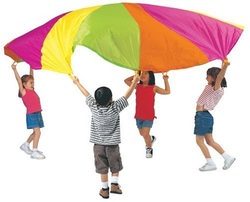 Children are naturally fascinated with sound and movement play as they teach themselves how to function in the world. Moreover, each child born on this earth has the potential to learn music. Without early, sequential music development guidance, however, the potential for true music understanding and enjoyment is left underdeveloped in most children.

Music Moves . . . is a musical approach that is based on the groundbreaking book A Music Learning Theory for Newborn and Young Children (Edwin E. Gordon, GIA Publications, Inc., 1997) as well as years of practical and experimental research. Music Moves . . . is designed to assist young children in their development of basic music skills such as singing, rhythm chanting, and moving. 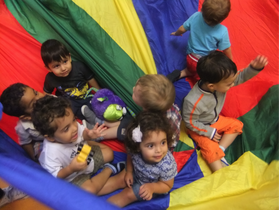 One’s potential to learn is never greater than at the moment of birth. (MLTNYC, 1:1) The early years of life are crucial for establishing a foundation for lifelong music development. A child’s musical experiences from birth to age five have a particularly profound impact on the extent to which your child will be able to understand, appreciate, and achieve in music as an adult. Children must be exposed to a rich variety of music during these years in order to develop the necessary readiness for formal music learning when they are older.

Children learn music in much the same way they learn a language. After listening to the sounds of their native language for many months, a child goes through a stage of language babble, in which they experiment with speech sounds that do not make sense to adult listeners. Soon afterwards, they “break the code” of their language and are able to first imitate words, and then use them meaningfully in phrases and sentences of their own.

Children also go through stages of music babble, in which they make sounds that typically do not make musical sense to adults. In tonal babble the child sings in a speaking voice quality. In rhythm babble she moves erratically, without consistent tempo or discernible meter.

Guidance and Instruction
All guidance is informal in nature, because the parent or teacher does not impose information and skills upon the child. Rather, the child is exposed to their culture and encouraged to absorb that culture. Nothing specific is expected or demanded from children in terms of their musical responses.

Formal instruction should normally commence at age five, when the child enters kindergarten. In formal instruction, in addition to the parent or teacher specifically planning what will be taught, teaching is organized into allotted time periods, and cooperation, including specific types of responses, is expected of the child.
Preparatory Audiation

There are three types of preparatory audiation.

Imitation. In musical imitation the childs musical actions become more purposeful than in the stages of acculturation. Whether their attempt to imitate is correct or incorrect, a child profits greatly from engaging in music imitation. The child begins to learn how to teach music to themself.

Assimilation. During the assimilation type of preparatory audiation the child starts to become aware of musical syntax. The child learns to perform patterns with some precision as they coordinate and assimilate the imitation of those patterns with the movement of their body and muscles. 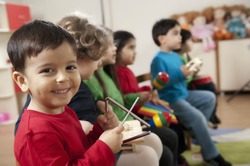 There are five possible classes for students to attend.  Each child should be accompanied by at least one parent or caregiver to attend a 30  - 40 minute session, once a week, for 10 weeks.  Classes are set by age: